npm is written in Node.js, so you need to install Node.js in order to use npm. You can install npm via the Node.js website, or by installing a Node Version Manager or NVM. This chapter explains both options.

If you just want to get started exploring npm, using the Node.js installation method is fastest. If you are an advanced developer ready to jump in and work with versions, use the node version manager. If you aren't sure, please read this chapter before you decide. You can always change how you run npm in the future.

If you're using OS X or Windows, use one of the installers from the Node.js download page. Be sure to install the version labeled LTS. Other versions have not yet been tested with npm. 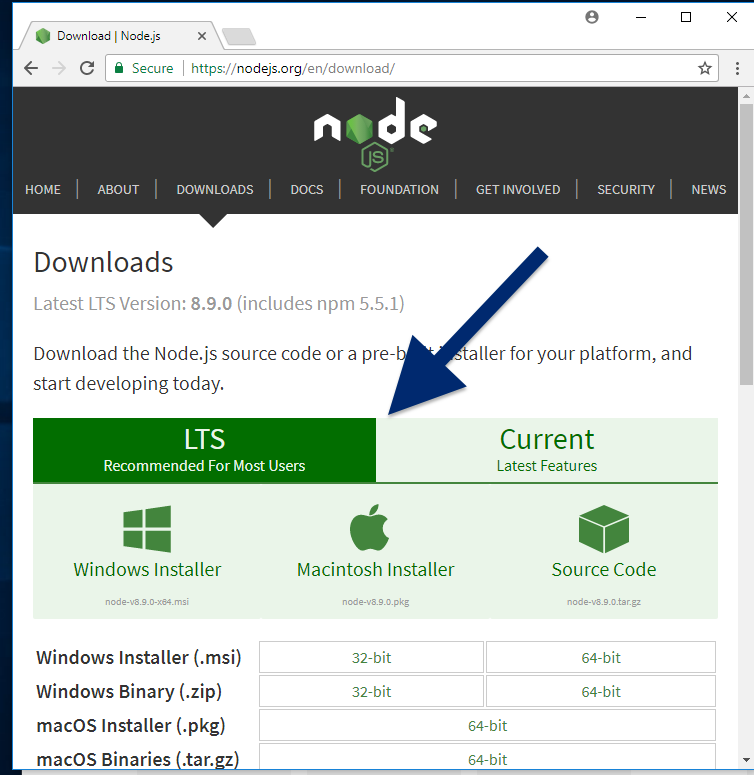 If you're using Linux, you can find installers by scrolling on the Node.js download page, or, check NodeSource's binary distributions to see if there's a more recent version that works with your system.

After installing, run node -v. The version should be v8.9.1 or higher.

When you install node.js, npm is automatically installed. However, npm gets updated more frequently than Node.js, so be sure that you have the latest version.

This will install the latest official, tested version of npm.

To install a version that will be released in the future, run:

Using a Version Manager to install Node.js and npm

Since npm and node.js products are managed by different entities, updates and maintenance can become complex. Also, the Node.js installation process installs npm in a directory that only has local permissions. This can cause permissions errors when you attempt to run packages globally.

To solve both these issues, many developers opt to use a node version manager, or nvm, to install npm. The version manager will avoid permissions errors, and will solve the complexities of updating Node.js and npm.

In addition, developers can use an nvm to test their applications on multiple versions of npm. The nvm enables you to easily switch npm as well as node versions. This makes it easier to ensure that your applications work for most users, even if they are using other versions of npm. If you decide to install a version manager, use the instructions for the version manager you select to learn how to switch versions, and to learn how to keep up-to-date with the latest version of npm.

Click here to learn how to install nvm for MacOs.

To install and manage npm and Node.js on Windows, we suggest nvm-windows.

Click here to learn how to install nvm for Linux.

Experimenting with the Next Release

If you want to try the next, unreleased version of npm to test that packages you have created will work with the planned next release of npm, use this command:

This may simply reinstall the current version, depending on the development cycle. Also, this early version is not final. So features may or may not match what is ultimately released.

To learn more about how to use nvm, click here.